With post-prandial cup of tea hastily gulped we set off back to the workshop. After lunch the workshop feels a bit like a hollow space so El chooses some background noise to work to. I’m sure there have been countless essays written about the effect of music on pace of work. Some people like it. Some people think it’s a distraction. I personally find that it provides a meter and tempo to my work and I’m sure that it unconsciously speeds things up, occupying the part of my brain not responsible for making an aeroplane and filling my subconscious with white noise and blocking out intrusive Christmas shopping thoughts.

With the tail frame that we made before lunch curing in the roof we turn our attention to creating the ladder structure to support the pilot’s seat and control arrangements. Compared to the tail frames, which are heavily documented photographically, we are flying more by the seat of the pants here. The front end of the aircraft is where it all happens. Visually and structurally it’s much more complex. Whilst the tail end is essentially a stiff tube to carry the tail control surfaces, the front end of the fuselage supports the wings, the engine, the landing gear, the fuel tanks, the controls for the aircraft, and of course the pilot and the navigator. This collection of disparate loads needs to be accurately and securely connected to disperse the stresses through the structure, and inevitably there is less photographic information available to work from.

I like to think of the CNC parts as providing me with a script to work from with a known degree of confidence. I only CNC cut finished parts once I am happy that they fit and interact together correctly, but of course we also have parts that must be created from solid treewood which have to be created to fit the CNC cut model. There are some instances where it becomes clear that a cut part is incorrect – which is one of the reasons we have produced a mock-up front end. This results in a list of mods required to correct things for the final cut. I like to think of the construction as a series of layers overlaid onto each other. If each preceding layer is accurately assembled, the following layer will in turn lie correctly. 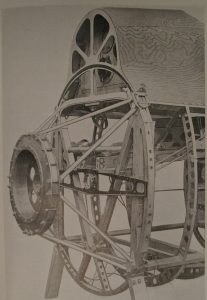 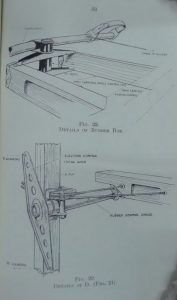 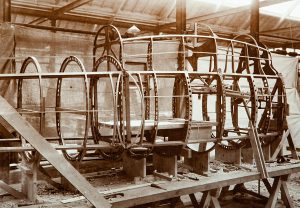 Building an aircraft like this is a tricky thing to get right. Gauging the correct dimensions of all the parts uses a combination of techniques including proportional scaling, Euclidian geometry, thinking about the construction in the same mindset ass the original designer, very close examination of all the relevant information and comparison with other similar aircraft. Ultimately the aim is to build it so that it looks and functions correctly. It could be said that any aircraft has two essential functions; to contain human beings and to fly. For elements of the structure where people are concerned reference to the human form is an essential guide – particularly in areas where we aren’t sure of the finer detail. Every detail is checked, questioned, and rechecked to test interaction with everything else. I’ve repeatedly found that human visual acuity is often accurate enough to gauge whether a part is correctly sized when compared to a part of known (or confidently derived) dimensions, and if incorrect it is fairly obvious.

With the pilot’s seat ladder structure we are making a mockup of the components from cheaper timber to test the dimensions before cutting into expensive spruce. Aircraft construction uses lots of specific materials that are both difficult and costly to obtain, and where parts need to be created to fit the fixed parts of the airframe the simplest and cheapest way to design is to make a prototype. It also allows us to develop techniques specific to wooden aircraft construction using modern tools and processes. The most recent example of this is spindling. Spindling is a process where a solid piece of wood with a rectangular section is hollowed out (lightened) to make a wooden I-beam girder. A solid piece of machined treewood contains a lot of redundant material, which provides no benefit to performance. In the days when wooden aeroplanes were being production built a machine called a spindle moulder was used, providing both the most efficient and most dangerous way of doing it. Given the scale of the work we are carrying out on the Panther, we have rethought the process using a hand-held router and a guiding jig, which will carry out the many spindling examples a little more slowly but in a controlled and cost-effective manner.

It’s a pleasant contrast to move from the assembly bench to the joining bench. The rest of the day passes in enjoyable formulaic work – reading and deriving from the drawings and pictures we have showing the assembly and measuring, marking out, cutting and joining.