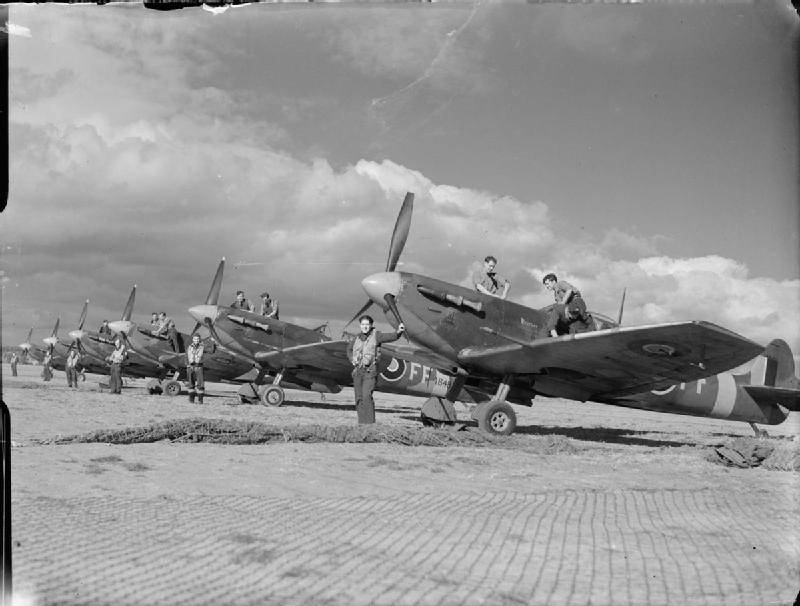 The Story of BL688 – an incredible Spitfire

BL688 was a unique aircraft fighting long and hard during the Second World War, beating the normal life expectancy of a Spitfire, which was four months or around 40 hours, to total an amazing three years with seven operational squadrons.

Originally BL688 was ordered from the Castle Bromwich Factory as part of a batch of 1000 Mk 2 aircraft which were delivered by the Air Transport Auxillary Ferry Pool to No 9 Maintenance Unit based at RAF Cosford on 25 January 1942 as a Mk Vb model.

On 13 March 1942 BL688 was issued to No 132 (City of Bombay) squadron RAF based at Skeabrae on the Orkney Islands. Here it carried out a range of operations including convoy patrols, general training including night flying, camera gun training and formation flying. It also participated in live firing exercised including a trip to Sumburgh, on the Shetland Islands. After suffering damage, the aircraft was quickly repaired and returned to flying duties in England based out of RAF Martlesham Heath.

On 23 March 1943 BL688 moved to No 501 (County of Gloucester) Squadron where she was involved in a mid air collision with another Spitfire, P8741 but managed to land at Ballyhalbert, Northern Ireland with minor damage.

The aircraft was sent to Rolls Royce Research & Development at Scottish Aviation on 14 July 1943 for modifications to the carburettor and engine to address the problems of negative G force. In the summer of 1943, 501 Squadron moved to Hawkinge in Kent and later, in December that year, the aircraft was posted to No 316 (City of Warsaw) Polish Fighter Squadron where it was flown by several Polish pilots.

On 1 May 1944, the aircraft went to 63 Squadron RAF and VCS-7 US Navy based at Lee on Solent. It flew Forward Air Control over the beaches of Normandy during D Day and remained active supporting ground troops and naval bombardment. Suffering damage in a landing incident on 4 November 1944, the aircraft returned to Essex for repair.

On 16 March 1945, BL688 went to No 58 OTU Squadron RAF Training Unit and on 29 June 1945, crashed at Walmersley, near Bury in Lancashire. The RAF recovered the wreckage and pilot’s body and he was buried at Newark Cemetary. The wreckage was taken to Cowley in Oxfordshire where it was reused in the war effort.

In 2006, the Lancashire Aircraft Investigation Team visited the site where the accident site, where, with the relevant permissions, they retrieved any parts left behind.

The role of BL688 in the D-Day Operations

BL688 was assigned to 63 Squadron, flying Forward Air Control with a total of 191 sorties between D-Day on 6 June and 25 June 1944. Ten squadrons, five of which were RAF, four Royal Navy Fleet Air Arm and VCS7 were brought together at Lee-on-Solent to provide air spotting for the fire support ships of the Western and Eastern Naval Task Forces. The former with Rear Admiral Alan G Kirk in command, landed the First US Army on beaches Utah and Omaha. The latter landed the British Second Army on beaches Gold, Juno and Sword. Two of the RAF squadrons, 26 and 63, with which BL688 served, flew Spitfires as part of a pool of aircraft which also included Mustang Mk I & Mk IA’s and Seafire Mk III – all aircraft were pooled with the crews flying whatever was available.

THE SQUADRONS WITH WHICH BL688 FLEW

BL688 flew with seven operational squadrons in total during the Second World War and was in the thick of action during the D-Day operations flying sorties over Normandy beaches at dangerously low levels, spotting for the Navy.

The Pilots who flew BL688

The pilots who flew in BL688 were from many different nations including Australia, Poland, France, New Zealand, the Caribbean as well as our own home bred British pilots. Some flew the aircraft once, while others spent more time on operations and training flights both during and after the war.

We are discovering more about these men and will add information as we locate it but if you have any information relating to pilots who may have flown BL688, email pac@parnall.net